I remembered after the first couple of steps that I needed to be taking photos as I went along. Hmmm, let me recreate it for you……You need a graham cracker crust. I don’t like graham cracker crusts and here’s why – whenever I buy graham crackers to make a crust, there’s always lots left over and I find them soggy and yucky months afterwards in my pantry. If I really need a graham cracker crust, I might buy graham cracker crumbs pre-made or I go with a better choice….. Oreo cookie crust. I have to stop and just say Yum right here. I bought the white oreo cookies which excited my family to no end (BTW have you ever tried TJ’s white Jo Jo’s? They’re outstanding!).
If you decide to make your own crust, then cross out the words No-bake at the top of this recipe as you’ll want to bake your pie crust to make it nice and crunchy and hold it’s shape better. If you’re going this route, pre-heat your oven to 350 degrees.
My recipe called for 25 cookies. What? That’s almost the entire packet. This wasn’t going to work for our brood, so I went with 20 cookies – it worked out okay. Honestly, a few more cookies probably would have been better for covering up the sides of the pie pan. Put them into your food processor. One for me, two for the processor. Or something like that. Grind them up until all of the white from the centers is gone and you have a fine crumb consistency.
Melt three tablespoons of butter and add this to the crumbs. Mix it all up and pour into a pie crust. Press the crumbs down and around the sides of the pan – to make this process easier, use the back of a spoon or the bottom of a measuring cup.
Place the pie shell in the pre-heated oven and bake for 5-7 minutes until just lightly golden. Watch carefully so that this doesn’t burn. Here’s how it should look when it comes out of the oven:

Now grab a 2-quart saucepan and mix together 1 cup water, 3/4 cup sugar and 2 tbsp of cornstarch. Mix well with a whisk. Heat just to boiling over medium heat, stirring constantly. Boil and stir for 1 minute. Take it off the heat and add four tablespoons of gelatin (about 1/2 a packet). Stir until dissolved. Place pan in the fridge for about 30 minutes and stir occasionally until this thickens and cools a bit.
When I made this recipe yesterday, I went to my trusty pantry to pull out raspberry jello to use in this recipe. Unfortunately, there was no packet of raspberry jello only a little lonely packet of orange jello. Good gracious! Now what? I checked out the reviews for this recipe and read that other readers used different flavors with great success. Choose whatever fruit flavor you have or want to and I think you’ll find that it really doesn’t affect the overall recipe at all.
Here’s what the mixture looks like after being refridgerated: 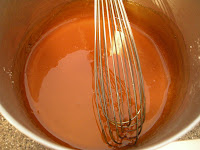 In a mixing bowl put your three fruits – you’re going to add three cups of one and one cup each of two. I chose blackberries, raspberries and blueberries. Why? Well, Kroger’s had blackberries on sale for $1 a container last week and I pick my own blueberries each Saturday. Raspberries were chosen as I thought they would match the other two berries. I used frozen raspberries and they were just fine in the recipe. I bought three containers of blackberries, but really two would have been just shy of the three cups I needed. Lucky us we had an afternoon treat of the leftover fresh blackberries. Measure and put all of the fruit into a mixing bowl.

Pour the gelatin mixture on top and gently fold the fruit and gelatin together.

Pour this into your cooled pie shell and place in the fridge for at least two hours.

I’ve never made this before, but it sure was delicious! The fruit flavors came through nicely and the texture was lovely. This would be perfect for a summer picnic on a hot day. I plan on making this again this summer to share.